Adobe XD vs Figma – Which Is The Better Design Tool In 2022?

TL;DR: Adobe XD has been around for longer in the UI/UX design scene, but Figma has been making waves recently and becoming a serious competitor. 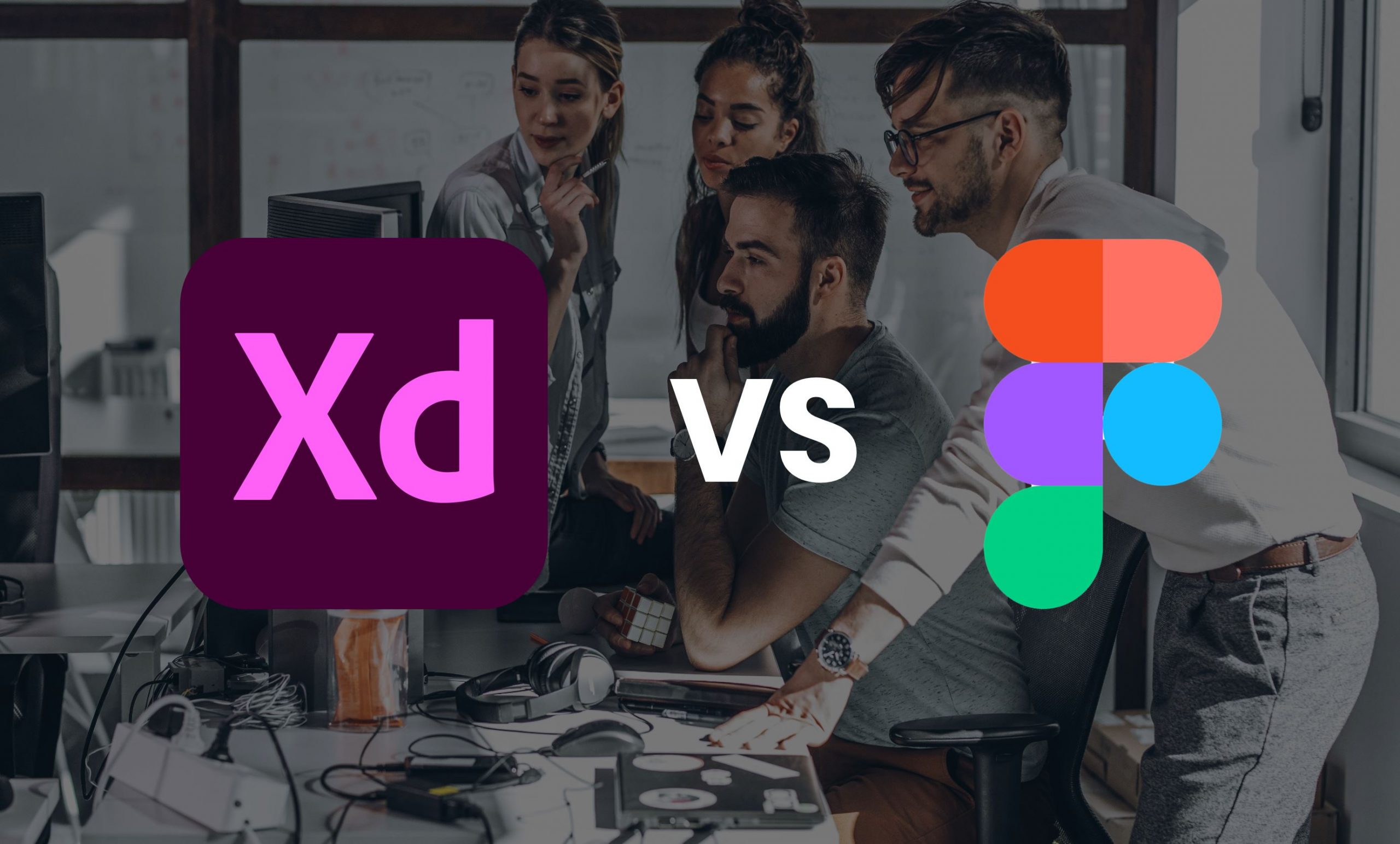 A good tool or software can make or break a design. It can be the difference between a mediocre and a great design. However, choosing a single tool over the many available options can be a challenging yet crucial decision every designer must make.

UI/UX designers have a lot of choices when it comes to software. But which experience design tool is the best? This question often comes up in the design community, and there is no easy answer.

Adobe XD and Figma are two of the industry’s most popular and arguably standout design software options. They both offer many features that allow users to create designs that look amazing and are usable, enjoyable, equitable, and ultimately beneficial for the end-user.

But the question is, which tool is best? It’s time for Adobe XD vs Figma – let’s finally put this debate to rest and decide which one of these tools will best fit your needs. Stay tuned!

Do you like experimenting with different design tools and features to see what works best for your UI/UX project? If so, you’ll want to check out Adobe XD.

Adobe XD or Adobe Experience Design is a powerful program that lets you create user interfaces, wireframes, and prototypes for digital products.

It’s relatively easy to use (it would be ironic if it weren’t) and perfect for designers of almost all experience levels. If you haven’t used this tool, then give it a shot. You might be surprised at how much you can achieve with Adobe XD.

Adobe XD is quickly becoming the preferred tool for UI/UX designers for several reasons, namely those listed below.

It is a highly versatile tool that can be used for everything from wireframing and creating high-fidelity prototypes to collaborating with internal and external stakeholders and handing off the project to developers.

Adobe XD has many built-in features that make it easy to create complex designs. Features such as 3D transform, components, states, and content-aware layout help UX designers use colours and styles to create layouts that look and feel like an actual browser or mobile application.

While the prototyping features such as auto-animate, voice prototyping, anchor links, and scroll groups enable users to build a fully functioning application prototype without writing a single line of code.

Adobe XD integrates seamlessly with other Adobe Creative Cloud tools, making it a powerful addition to any designer’s toolkit. Most designers frequently use one or more Adobe creative tools. Thus, it would make sense to stick with Adobe and utilise XD for your UX design projects.

Adobe XD is constantly updated with new features and improvements, making it an ever-evolving tool that consistently meets the modern designer’s needs.

All in all, Adobe XD is an excellent UI/UX tool because it is versatile, powerful, and constantly evolving. But it’s not the only option, as we have yet to speak about the other contender.

Adobe XD has long been the go-to tool for UI/UX designers. However, Figma has recently emerged as a genuine competitor, offering a more collaborative, powerful, and user-friendly design experience.

Initially released in 2016, Figma has become a severe threat to Adobe XD in recent years due to its unique focus on real-time project collaboration and providing an extensive library of helpful prototyping and vector graphics editing tools.

Built for improved collaboration, Figma is an incredibly collaborative platform compared to other UX design tools like Adobe XD and Sketch. If your team requires inter-coordinated design efforts, then Figma is hands down the best UI/UX tool for you.

But doesn’t XD offer collaborative features such as co-editing, link sharing, and cloud synchronisation? Yes, but that pales compared to what you can do on Figma from a collaborative perspective.

For instance, multiple users can edit a design project simultaneously, and there is built-in commenting functionality so that everyone can give and receive feedback. Contrast this to Adobe XD, where only one person can make changes at a time, slowing down the design process considerably.

Figma also offers a more user-friendly interface. Adobe XD can be overwhelming for beginners with its complicated menus and options. Figma, however, has a sleek and straightforward interface that makes it easy to jump in and start designing.

Moving into the specific features and tools, Figma allows designers to add as many fills, strokes, and effects to any shape as they see fit. In Adobe XD, however, you are limited to just one of each. This can be frustrating for Adobe XD designers who want to experiment and adopt a trial-and-error approach, as they would have to move back and forth between elements constantly.

You’ll also have a better experience adding gradient colours to stroke or fill, as you’d have to select the shape, pick the straw colour, and change it to the gradient you want to use. On Adobe XD, this process is not as straightforward, as you’ll have to create an entirely distinct shape, place it beneath the primary shape, and then insert the gradient fill. As you can imagine, this is a much more tedious process that will cause productivity issues in your design project.

With all that said, if you have used other Adobe products in the past, you might find XD much easier to use compared to Figma, which will feel like a completely new interface.

Figma is constantly adding new features and improving the overall experience. Adobe XD has made some changes but remains similar mainly for the past few years, while Figma continuously innovates to make the design process faster and easier.

Therefore, for these reasons and more, Figma is quickly becoming one of the best UX tools on the market and a serious rival to Adobe XD.

So now that we’ve broken down the two tools separately to understand what each has to offer let’s compare them to find out which is the superior UX design software currently available.

We’ll be gauging Adobe XD and Figma in the following categories.

Adobe XD and Figma are available on macOS, Windows, iOS, and Android. However, Adobe XD, unlike Figma, which is predominantly a browser-based application, works exclusively on either a desktop or mobile application.

There is little to separate the two here, as both are compatible across all the major platforms and operating systems.

Figma is the clear winner here. As we’ve already discussed, not only can you edit projects as a team in real-time, but you can also leave comments, provide feedback and view who made changes.

While XD also offers real-time collaboration, it is handicapped because only one user can edit a project at a time. As a result, XD’s co-editing tool is excellent but not as flexible or multi-faceted as Figma’s.

Despite Figma launching its first set of plugins in 2019, it has a much more extensive plugin library than Adobe XD. As a result, you’ll find more useful plugins on Figma than on XD, which can be a significant deciding factor between the two tools.

If you are someone who relies upon and utilises plugins in their project for automation, and enhancements, then chances are, you’ll find a better and broader selection of plugins on Figma than on XD.

If you’ve used any of Adobe’s creative tools, XD’s interface will seem familiar, and you could end up with an easier learning curve.

Furthermore, Adobe XD offers plenty of excellent learning materials to help you proficiently use the tool at a reasonably quick pace. Step-by-step on-screen demos, video tutorials, and recorded live streams will help you become a skilled XD user in no time.

Figma also offers some good learning resources with written lessons and exercises, but the interface will be new to most beginners who could initially find it challenging to learn the tool.

Again, we feel that Figma is the clear winner in this aspect because of its ability to update documents that have been shared for review without republishing them.

Figma works exclusively on the browser, which means it’s always connected to the cloud, and you won’t have to keep updating every prototyping change in real-time.

Furthermore, the improved collaboration capabilities of Figma come in handy here because you can just invite developers to view the design, leave comments and export required assets within a few clicks.

If you’re a beginner who just wants to learn and play around with experience design tools, then Figma would be ideal because it offers a free starter version. In addition, you’ll have access to the rudimentary functionalities and features required to learn the software and create your portfolio.

That said, if you want to use the premium version of Figma, then it will be the more expensive of the two, costing US$12.00 per user per month when paid annually, as opposed to Adobe XD’s relatively cheaper pricing at US$9.99 a month, with an option for a 7-day free trial as well.

Well, there you have it. Figma wins this showdown by a decisive margin. But does that mean it is the best UI/UX design tool for everyone?

While Figma does come out on top in most of the categories we measured these tools on, both programs are unique in their own right and will become an integral asset in any UI/UX designer’s arsenal.

Which is the best design software for you? Adobe XD might be better if you’re looking for a tried-and-trusted comprehensive design suite with a wide range of features. It’s preferable if you have used or are using Adobe’s creative tools.

But if you’re looking for something more lightweight yet super-powerful and collaborative, Figma could be a better fit. No matter what tool you choose, always keep in mind the importance of user experience in your designs!

Ultimately, you must design products for users that add value to their lives, regardless of the tools you incorporate in your creative process.

Feel free to book a discovery session with us if you’d like to learn more about designing intuitive customer experiences. We’ll help you get started in your digital transformation journey.

What Is Clearbit And What Can You Do With It For Marketing Intelligence?

Do you know about Clearbit? This “data activation platform” is revolutionising marketing intelligence in some areas through which you now have the opportunity to know your audience like never before!
By Jerry Wallis
11 min read
11 min read
Read More
Blog Post

What Is A Proof Of Concept (POC) & Where Does It Fit Into Software Development?

Carefully crafted POCs pose many merits in software development. From seeing if a project is feasible for the market to finding alternative solutions, a POC can help you get ahead of the competition.
By Julian Wallis
13 min read
13 min read
Read More
Blog Post

What Are Augmented Teams & How Do They Work With Product Owners?

Find the right technical resource that compliments your existing team and is capable of developing your idea into a fully-functioning product.
By Jerry Wallis
12 min read
12 min read
Read More
VISIT LEARNING CENTER

Are you looking for a trusted Customer Experience Transformation Partner that can help you scale by using technology to create world-leading customer experiences for your brand and streamline your sales and service processes?

We understand that innovation, design and development can be challenging and daunting areas for any business to navigate, so we are here to help you.