What Is Cross-Platform Software Development & Why Is It The Next Big Thing?

TL;DR: Cross-platform software development helps you build software for multiple platforms, including applications that run on different operating systems or websites that can be accessed from different devices. 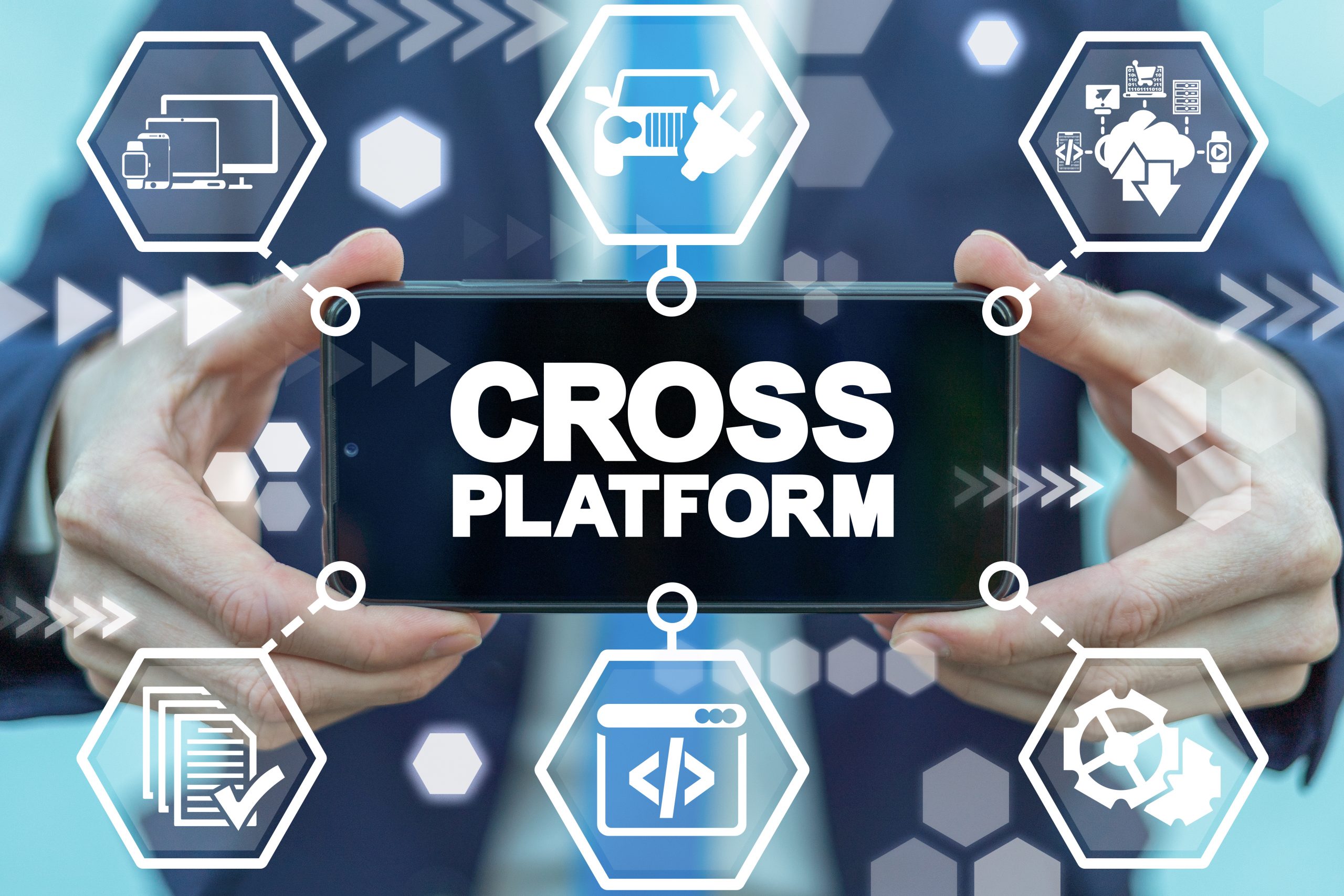 What Is Cross-Platform App Development? 🧐

In recent years, there has been a growing trend in the software development industry towards what is known as “cross-platform” development. This approach to software development allows developers to create applications that run on multiple platforms, such as Windows, Mac, Linux, and even mobile devices.

The use of cross-platform software development tools has grown in popularity in recent years. This is due to their many advantages compared to traditional development approaches.

Some of the main benefits of using cross-platform software development tools include the following.

The development of cross-platform software is becoming increasingly popular as businesses strive to reach a wider audience. However, there are several limitations when opting for this type of development.

One of the most significant limitations is the lack of platform-specific features. For example, if you develop a cross-platform app for iOS and Android, the app will have to be designed in a way that doesn’t take advantage of any specific features of either operating system. This can impact the overall user experience and make your app less polished than a native app.

Another limitation is performance. Cross-platform apps often have to sacrifice performance to run on multiple platforms. This can make them feel slower and more resource intensive than native apps.

Finally, cross-platform apps can be more challenging to maintain. With multiple code bases to keep track of, it’s easy to introduce bugs or make changes that break compatibility with one or more platforms. This can be a nightmare for developers and lead to long turnaround times for updates and fixes.

Despite these limitations, cross-platform software development can still be a viable option for businesses that want to reach the broadest possible audience. However, it’s crucial to weigh the pros and cons carefully before deciding.

Cross-platform software development frameworks allow developers to create applications that can be used on multiple operating systems and devices. This can significantly benefit businesses, allowing them to reach a wider audience with their products.

Many different cross-platform software development tools are available, so choosing the right one can be challenging. To help you make the best decision for your needs, here are five popular ones:

Unity is a cross-platform game engine developed by Unity Technologies, first announced and released in June 2005 at Apple Inc.’s Worldwide Developers Conference. As of now, the engine has been extended to support more than 25 platforms. The engine can create three-dimensional, two-dimensional, virtual, and augmented reality games, simulations, and other experiences.

Unity Technologies focuses on the development of game engines for video games. However, it has expanded into other industries, such as architectural design visualisations and medical diagnostics simulations. It also supports the development of augmented reality systems like Google Glass and Oculus Rift.

Unity’s asset store is an online library where developers can buy and sell game assets such as 3D models, scripts, animations, and whole game projects. It helps fund the development of Unity itself and provides a valuable source of revenue for individual developers and small studios.

Unity has been praised for its ease of use, flexibility, and power. However, it lacks support for older versions of Windows and macOS. It has also been accused of being too easy to use, which resulted in some low-quality games being released on the platform. Nevertheless, it remains one of the most popular game engines in the world and is used by many large studios and small independent developers.

React Native is a cross-platform mobile development framework created by Facebook. It allows you to use React to build native mobile applications. React Native is similar to React but uses native components instead of web components as its building blocks.

React Native lets you create truly native apps and doesn’t compromise your users’ experience. It provides a consistent cross-platform software development environment, so you can focus on creating a great user experience. Many companies use React Native to build mobile apps, including Facebook, Instagram, Pinterest, Skype, Tesla, Uber, and Walmart.

With React Native, you can create iOS and Android apps with a single codebase. This makes it easy to develop and deploy your app to multiple platforms. And because React Native uses the same UI components as regular React, you can be confident that your app will look great on all devices.

If you’re looking for a way to create native mobile apps, React Native is a great option. It’s easy to learn, fast and efficient and produces high-quality apps.

Flutter is an open-source mobile application development framework created by Google. It is used to develop applications for Android and iOS. Flutter is built on the Dart programming language and uses the Skia graphics engine.

Flutter was first announced at the Google I/O conference in May 2017, and its first beta version was released in February 2018. Since then, it has been steadily gaining popularity among developers. As of May 2019, more than 1,000 packages are available on pub.dev, the official package repository for Dart.

Flutter allows developers to create high-quality native apps for Android and iOS platforms with a single codebase. This means that developers can use the same codebase to develop apps for both platforms, which saves a lot of time and effort.

Flutter is based on the Dart programming language, which is easy to learn for those who are already familiar with Java or JavaScript. Dart is a compiled language that can be executed natively on iOS and Android devices.

Flutter also has an excellent widget system that allows developers to create beautiful user interfaces for their apps. Flutter widgets are highly customisable and can be used to create anything from simple layouts to complex animations.

Overall, Flutter is an excellent cross-platform software development framework that offers many benefits for developers and users. If you’re looking to create high-quality native apps for Android and iOS, Flutter is definitely worth considering.

If you’re unsure whether to use React Native or Flutter in your cross-platform software development projects, check out our detailed comparison article – Flutter vs React Native.

Xamarin was created by Mono, an open-source project sponsored by Microsoft. Xamarin is now a subsidiary of Microsoft.

Xamarin’s main advantage over other cross-platform software development tools is its native controls and UI elements. This allows developers to create apps with a truly native look and feel while still sharing code across platforms.

Another advantage of Xamarin is its tight integration with Visual Studio, Microsoft’s IDE for .NET development. This allows developers to use the full power of Visual Studio when developing their apps.

Xamarin is a powerful tool for cross-platform app development. Its native controls and tight integration with Visual Studio make it an excellent choice for developers who want to create high-quality apps that look and feel like actual native applications.

Titanium SDK is a cross-platform software development tool that allows developers to create native mobile apps using JavaScript. With it, developers can write their code once and deploy it to multiple platforms, including iOS, Android, and Windows Phone. Titanium SDK also provides several features and services that make it easy for developers to build and manage their apps, including a wealth of SDKs, an IDE, and a cloud service.

Titanium SDK is an excellent option to consider if you’re looking to create a native mobile app using JavaScript. The platform offers a wealth of features and services that make it easy to build and manage your app. And with its cross-platform capabilities, you can quickly deploy your app to multiple platforms.

Choosing the right cross-platform software development tool can be a challenge. However, by considering your needs and the features offered by each platform, you can find the best tool for your project.

Here’s How You Can Build Your Own Cross-Platform App 🧰

Building your own cross-platform app can be a great way to reach a wider audience with your product or service. Not only will you be able to offer your app to users on multiple devices, but you’ll also be able to take advantage of the features and benefits of each platform.

Regarding cross-platform software development, there are two main approaches: native & web-based. Native apps are developed specifically for each platform using the corresponding SDKs, while web-based apps are optimised for mobile devices.

Both have pros and cons, but ultimately it’s up to you to decide which approach is suitable for your project. If you’re unsure where to start, native app development is usually the best bet.

No matter which approach you choose, building a cross-platform app can be a great way to reach a wider audience with your product or service. With the right tools and technologies in place, you can create an app that looks and feels at home on any device.

Things To Consider When Building A Cross-Platform App 🤔

Several things must be considered when building a cross-platform app.

These are just a few things to consider when building a cross-platform app. By planning ahead, you can increase your chances of success and create an app that users will love.

It’s high time you adopted the principles of a cross-platform software development approach and stayed relevant and consistent in the market. If you need help creating a cross-platform app (or understanding the process), feel free to write to us for a friendly discovery chat. We’d be happy to help!

The Tech Behind Amazon Alexa

Voice recognition AI is adding a new sense of comfort, intuitiveness, and convenience to our lives. Amazon Alexa is the most successful example of this.
By Jerry Wallis
23 min read
23 min read
Read More
Blog Post

What Happens When There’s A Mismatch In Software Design & Software Implementation?

Software design mismatching with software implementation often results in higher development costs due to the extra time & effort needed to troubleshoot and resolve issues. It also damages the user experience, as users are left with a product that doesn't perform as expected.
By Julian Wallis
11 min read
11 min read
Read More
Blog Post

Your ideal customers are on mobile. Shouldn’t you be too? Developing an app is becoming more and more of a necessity with the world going mobile.
By Jerry Wallis
17 min read
17 min read
Read More
VISIT LEARNING CENTER