TL;DR: The Ocean Cleanup Project collects and removes debris from the ocean’s surface and eventually helps improve the health of the ocean’s ecosystem by reducing the amount of waste that can harm marine life. 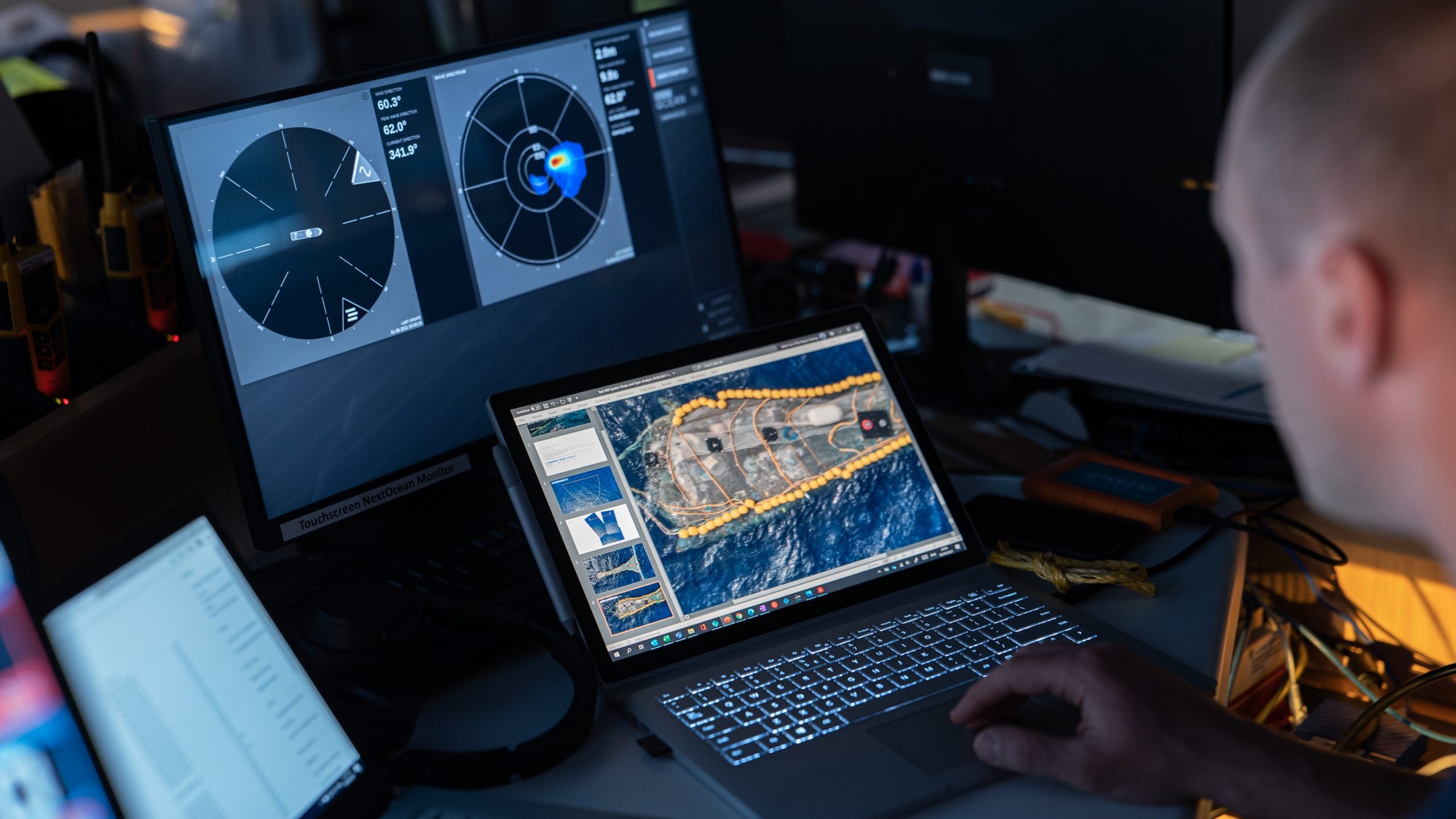 But do you know that AI is being used increasingly to help clean up the world’s oceans? Many projects use AI in different ways to help with this monumental task.

One such project is The Ocean Cleanup Project, which creates a giant floating barrier to collect plastic debris from the ocean. The barrier is made up of long tubes that are connected. The current will collect the waste and be funnelled into a central collection point.

Dubbed “the largest cleanup in history,” The Ocean Cleanup Project develops and scales technologies to remove plastic and rubbish from our oceans. The team intends to clean “90% of floating ocean debris by 2040” by closing the source and cleaning what’s accumulated so far.

Let’s explore more about the project and how they’re trying to achieve such a magnificent goal.

The Ocean Cleanup Project is doing its part to help clean up the world’s oceans. Founded in 2013 by Dutch inventor Boyan Slat at the young age of 18, the nonprofit organisation uses a combination of AI and remote-sensing tools to identify and collect plastic waste material.

The Ocean Cleanup Project’s team consists of 120 engineers, researchers, and scientists committed to one mission: to rid the oceans of plastic. They know plastic pollution is one of the biggest environmental problems that impact nearly 700 marine species and cost billions of dollars to world nations. Plastic pollution also affects human health, so it’s an urgent issue that needs to be addressed.

The project has collected more than 500 tonnes of plastic waste. And it’s not just from one area — the group has cleaned up the debris from all over the world, including in the Great Pacific Garbage Patch between Hawaii and California.

How The Ocean Cleanup Project Is Using AI To Drive Innovation

The Ocean Cleanup Project is making a difference, and it’s all thanks to AI.

With this technology, the group can quickly and efficiently identify areas with a high concentration of plastic waste. This allows them to deploy resources to those areas and make the most significant impact.

The problem with floating plastics is that they tend to break down into smaller pieces called “microplastics” once trapped in a gyre. These smaller bits of plastics are more difficult to collect as marine life often mistakes the floating debris for food. Therefore, a cutting-edge technology-infused solution is necessary to clean large patches of plastic waste.

The team brings the floating plastic debris back to the shore for recycling. They’ve even made their first product, “The Ocean Cleanup Sunglasses,” from recycled plastic. Moving forward, they do not intend to make more such products but partner with companies that use recycled plastic.

Since plastic waste comes from many rivers, the experts at The Ocean Cleanup Project have made Interceptors™ — structures that trap plastic waste before it enters the oceans. In addition, they have collaborated with governments and corporations to tackle the most polluted 1000 rivers in the world.

So far, the group has successfully managed to clean up the world’s oceans. And with AI on their side, they will continue making a difference for years.

Let’s take a closer look at how they’ve achieved such a feat!

The AI Monitors The Plastic Density — Here’s How

The research team at The Ocean Cleanup uses new technology and AI-powered tools to make it easier for them to identify optimal locations where cleanup operations can be done.

Before building the software, they had datasets produced via either conventional methods (trawling) or less conventional ones (aeroplanes). Trawling is very trying, if not impossible, because they need so many human resources, whereas collecting data from planes is very costly and complex.

However, with this latest development, they expect data-driven insights concerning plastic densities at remote ocean sites all around the planet. Thanks to the effective implementation of AI, the research team has developed a more intelligent and effective way to detect and monitor plastic waste.

They have been working on this AI detection software for over two years. Combined with the time-lapse images and GPS-tagged transects, the software creates a remote sensing approach to detect and map the debris.

Eventually, this AI software will help the team with precise locations to deploy and monitor the cleanup process. Using GoPro cameras on commercial ships, the team can scan hundreds of kilometres and analyse what they see on the surface of all five oceans.

The AI will completely replace the manual and on-site observation for data collection. Instead, it will employ remote sensing tools to continuously monitor the location and amount of floating plastic.

A Team Of Experts Train The Algorithm

With the advancements in remote sensing technology, The Ocean Cleanup Project can track objects without actual physical presence.

These technologies rely on “object detection” AI, which has been taking off in recent years. This same technology can be used for everyday use cases like facial recognition or identifying cars on your phone when you take pictures nearby. The more input images an AI has been trained on, the better it will become at identifying objects.

The best way to provide this kind of training for their AI is through large datasets that are constantly updated with new photographs taken from various locations. For instance, the team aboard System 001/B captured over 100,000 photos of waves and water throughout the mission with Maersk Transporter. However, this time-lapse footage also revealed some floating litter objects that were geotagged at their respective GPS coordinates, meaning they can be traced back to where they originated. With this, plastic can be stopped from entering the ocean early on.

Video Courtesy of The Ocean Cleanup

The Experts Build & Run A Processing Flow — And Map Results!

The AI software can determine the camera orientation based on how much of an object is visible in one image. With this information, the software can construct a projection and estimate its size and the distance from the ship — all while using only 600 GB (2 days’ worth) of images!

The AI also generates suggestions for items that might be seen during training; these “object ideas” are then sorted out by human operators who have been trained with years of knowledge of knowing what goes into making different objects at seas and oceans.

The team’s study is the first to use photographs as data points and map them using GPS coordinates. As a result, they could track down where in our oceans these objects are found and determine how many things exist within each group at any given time.

In turn, this gave them an idea about overall abundance levels for various types of plastics across different regions!

What’s Next For The Ocean Cleanup Project?

The Ocean Cleanup Project has been making great strides in mapping out the amount of plastic underwater. They have launched a fleet of cameras to map plastic concentrations in the ocean.

They will use ground truth from photos taken by cameras at different locations, which should provide an accurate representation of where you can find most debris on our planet’s surface.

The plan is for these observations and data collection efforts to be simultaneously trialled at locations offshore, using manta trawls and mega-trawls while collecting photos with GoPro!

This method may offer them a detailed insight into remote regions they haven’t gone to before because it can process bulk amounts quickly without compromising accuracy or resolution.

Organisations like The Ocean Cleanup Project are living proof that artificial intelligence and upcoming technologies can be used in noble work, such as cleaning the environment.

Please note: Any images and registered trademarks are the copyright and ownership of The Ocean Cleanup Project. They are used in this article entirely for the purpose of education and review of the technology being utilised by the company in its products and mission.

What Is Clearbit And What Can You Do With It For Marketing Intelligence?

Do you know about Clearbit? This “data activation platform” is revolutionising marketing intelligence in some areas through which you now have the opportunity to know your audience like never before!
By Jerry Wallis
11 min read
11 min read
Read More
Blog Post

What Is A Proof Of Concept (POC) & Where Does It Fit Into Software Development?

Carefully crafted POCs pose many merits in software development. From seeing if a project is feasible for the market to finding alternative solutions, a POC can help you get ahead of the competition.
By Julian Wallis
13 min read
13 min read
Read More
Blog Post

What Are Augmented Teams & How Do They Work With Product Owners?

Find the right technical resource that compliments your existing team and is capable of developing your idea into a fully-functioning product.
By Jerry Wallis
12 min read
12 min read
Read More
VISIT LEARNING CENTER

Are you looking for a trusted Customer Experience Transformation Partner that can help you scale by using technology to create world-leading customer experiences for your brand and streamline your sales and service processes?

We understand that innovation, design and development can be challenging and daunting areas for any business to navigate, so we are here to help you.